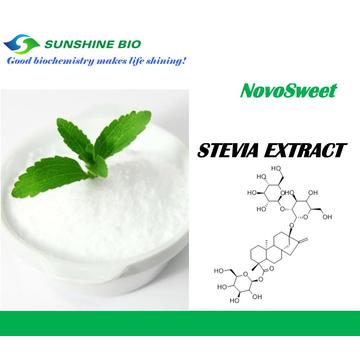 Stevia Extracts are novel sweeteners – a combination of several sweeteners of natural origin.  The major ingredients in Stevia Extract are glycosides, molecules that contain glucose and other non-sugar substances called aglycones. The tongue's sweet taste receptors react to the glucose in the glycosides, thus those with more glucose (e.g. rebaudiosides) taste sweeter than those with less (e.g. stevioside). Some of the tongue's bitter receptors react to the aglycones, thus the ultimate taste of Stevia glycosides depends on the ratio between the glucose component and the aglycones component of a particular glycoside.   The taste profile of Stevia glycoside is different from sucrose – slower onset, longer lasting, and often with a bitter after taste.  In general, Stevia extract glycosides are about 150 to 250 times sweeter than sugar.  These glycosides are stable at elevated temperature and under moderately acidic or basic conditions, making them suitable for use in a variety of heat processed foods and other products.

When ingested into the digestive tract, rebaudiosides are metabolised into stevioside which is broken down into glucose and steviol. The glucose released in this process is used by bacteria in the colon and not absorbed into the bloodstream, thus it does not contribute to any significant calorie intake.  The metabolite Steviol cannot be further absorbed and is excreted as is.

The legal status of Stevia Extracts varies from country to country.  The purified rebaudiosides and steviosides are normally considered GRAS (Generally Recognized As Safe) materials in the US and they have been approved for many uses in EU and Japan.

At Sunshine Biotech, we supply customers with a range of high quality Stevia glycosides and blends, catered to the unique requirements of our customers. 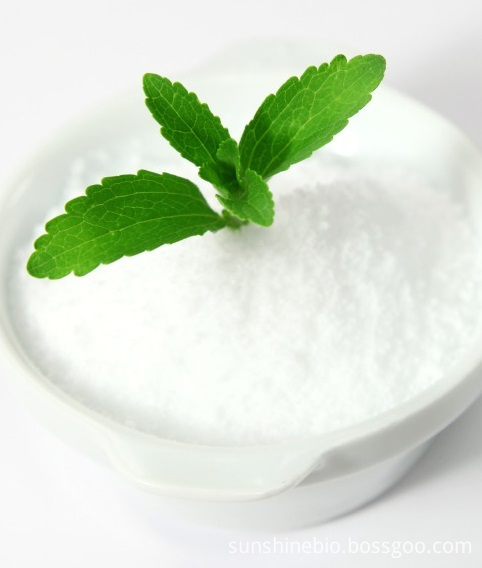